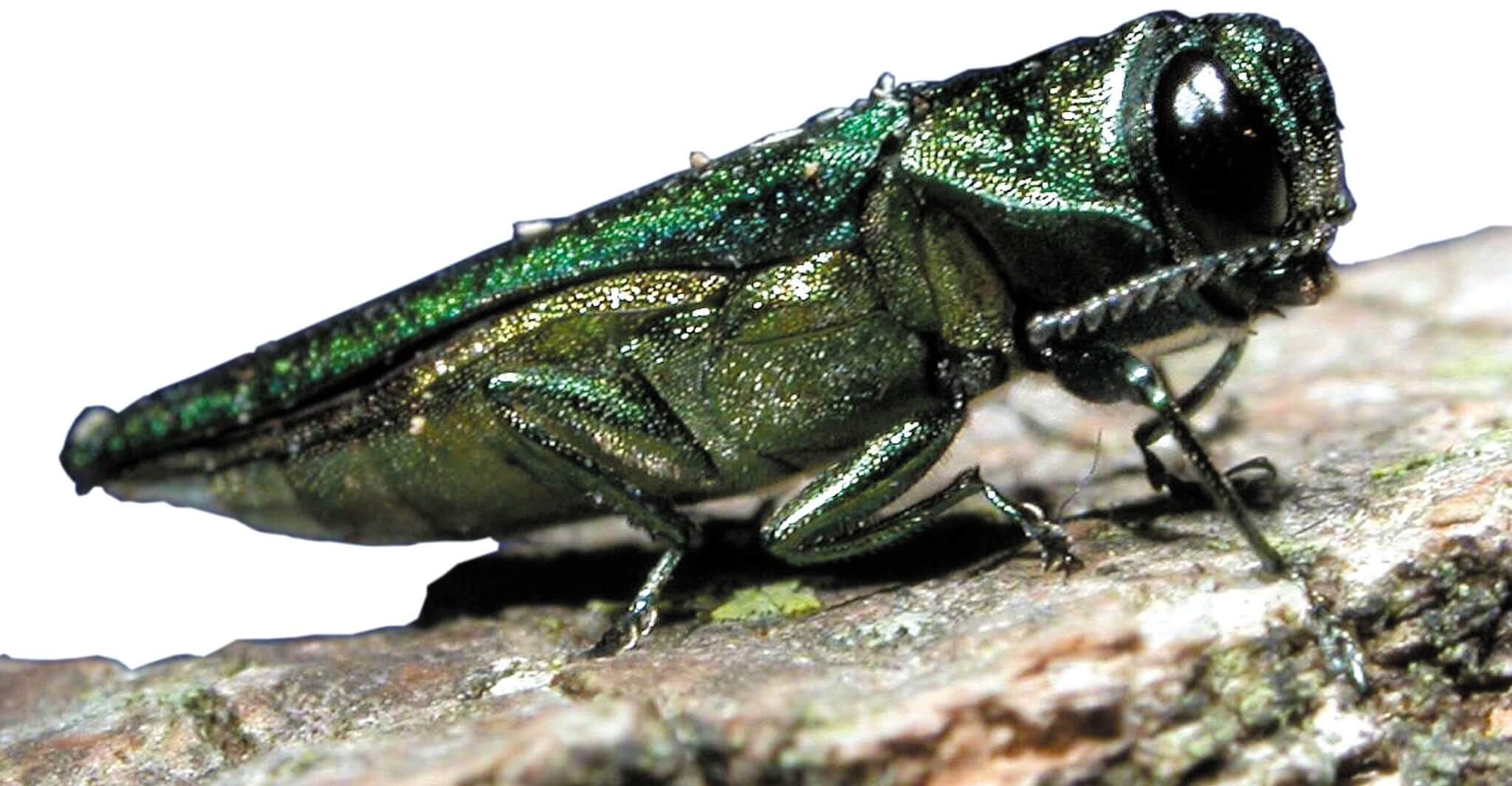 The emerald ash borer (EAB, or Agrilus planipennis) is a green beetle native to Asia and Eastern Russia. Outside its native region, the emerald ash borer is an invasive species, and emerald ash borer infestation is highly destructive to ash trees, having infested millions of ash trees in its introduced range. The Emerald Ash Borer was first discovered in the United States in Michigan in 2002. It is believed to have been brought to North America unintentionally in ash wood used to stabilize crates during shipping. Emerald Ash Borer Awareness Week is May 23 -29 in 2021, so Stein Tree Service offers information about this invasive pest.

A key part of emerald ash borer awareness is knowing the emerald ash borer life cycle. Understanding the life cycle will help you understand what to do when you see any activity on or around your property. Below are the different life cycle stages of this highly destructive invasive species.

The adult emerald ash borer is a dark metallic green, bullet-shaped beetle, and about 1/3 inch long (8.5 millimeters), and 1/16 inch wide (1.6 mm). The body is narrow and elongated, and the head is flat with black eyes. After emergence, adults fly into the ash canopy, where they feed on leaves throughout their lives. EAB adults start mating one week after emergence, and females begin laying eggs 2–3 weeks later. A typical female will lay approximately 100 eggs during her 2-month life; 56% of these eggs, on average, will be female. EAB adults are readily observed mating and egg-laying on the trunks of ash trees on warm, sunny afternoons and evenings in the field. The adults of both sexes are strong fliers.

A female EAB may lay more than 100 eggs in her lifetime, depositing them individually or in groups on the bark of ash trees along the trunk and portions of the major branches. Eggs are laid in areas where the bark is rough and between bark layers or in bark crevices.

Newly hatched larvae bore through the bark to the phloem and outer layer of new sapwood, where they feed until the weather gets too cold in the fall. There are four stages of larval development (instars). As they feed, the larvae create long serpentine galleries filled with frass, which enlarge in width as they grow. 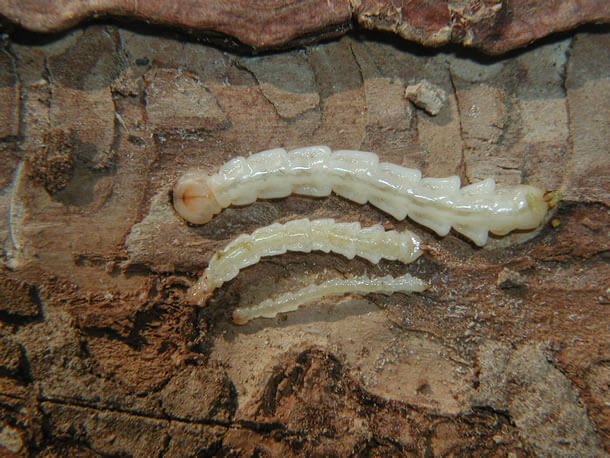 Larvae are creamy-white and dorso-ventrally flattened. When fully mature, fourth-instar larvae are 26 to 32 mm long. Their head is mainly retracted into the prothorax with only the dark brown mouth parts visible. The prothorax is enlarged, with the mesothorax and metathorax narrower. Larvae have 10 bell-shaped abdominal segments and a pair of small brown structures called urogomphi, which are characteristic of all larvae in the genus Agrilus.

In the fall, mature fourth-instar emerald ash borer larvae excavate pupal chambers in the sapwood or outer bark where they fold into overwintering “J-shaped larvae.” In the spring, the J-shaped larvae shorten into prepupae then shed their cuticle to become naked pupae. Pupae are initially creamy white, but the eyes turn red, and the bodies begin to darken as they develop.

Another critical aspect of emerald ash borer awareness is identifying signs of infestation. Adults chew D-shaped exit holes through the bark to emerge from infested trees and can immediately fly upon emergence. EAB larvae that are immature as cold weather arrives in the fall will overwinter in their larval gallery. Larger larvae complete development the following spring, whereas smaller larvae may require another summer of feeding to complete development.

The most significant damage to a tree by EAB infestation occurs when the insect is in its larval stage. The larvae feed on the conductive tissue of the tree. This tissue transfers nutrients and water from the roots to the leaves, and when this is disturbed, the infested ash tree begins to die. At the onset of winter, the larvae relocate to the tree’s bark, effectively cutting off the tissue more. This ultimately results in the death of a tree. This can take place over several years, and the first noticeable sign is usually some die back in the crown of the tree. The tree will usually be dead by the following year or soon after. In areas where the insect is invasive and has no natural predators, it can and usually does have a devastating effect on the local ash tree population.

Prevention of the emerald ash borer infestation is possible by injecting a systemic insecticide into the base of the tree. This treatment can prevent damage to the tree for up to two years. Note that arborists must reapply application every two years. Soil injections are another option for the prevention of EAB. These insecticides are injected directly into the soil surrounding the tree’s base and are then transported through the rest of the tree via the roots. For these treatments to have the greatest effect, the soil must be moist when applied. Waterlogged or dry soils will result in less insecticide being absorbed into the tree.

Arborists can use two insecticide spray treatments. The first is a spray that is applied to the trunk and absorbed through the bark. This treatment is less invasive to the tree and soil. However, if the tree has thick bark, absorption is slow and limited. The second spray treatment is a protective cover spray applied to the branches and trunk of the tree. This treatment kills adult beetle and newly hatched larva; however, it will not kill eggs.

If you want to keep your trees safe during emerald ash borer awareness week and all year, contact Stein Tree Service at (302) 478-3511 to request your free, no-obligation consultation with one of our ISA Board Certified Arborists.