Five Common Questions about the Emerald Ash Borer in Wilmington 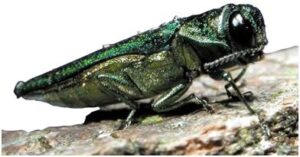 An invasive insect species that made its way to the United States years ago is causing significant damage to the nation’s forests. Already discovered in 35 states, the Emerald Ash Borer (EAB) is a substantial threat to residents and businesses in Delaware.

Certified Arborists in Wilmington, and across the country, are deeply concerned about the rapid spread of the emerald ash borer (EAB), so we at Stein Tree Service have put together a small FAQ to let people know about this new insect threat.

FAQs about the Emerald Ash Borer in Wilmington

Certified Arborists in Wilmington and across the country are very concerned about the rapid spread of the emerald ash borer so we at Stein Tree Service have put together a small FAQ to let people know about this new insect threat.

What is the emerald ash borer?

The EAB is a small species of beetle native to Asia but accidentally brought to America sometime in the late 1990s. The insect is about the length of a dime, around 8.5 millimeters or 1/3 of an inch, and notable for its extremely brilliant metallic green shell and wings.

EABs lay their eggs (around 60 to 90 eggs a lifetime) beneath the bark of ash trees, which hatch into larvae that quickly begin consuming the flesh of the tree underneath. As the larvae feed on the ash tree and grow into adults, the beetles make their way to the exterior of the tree before mating and laying more eggs. The end result is an unhealthy, or even dead, ash tree, and more beetles that can spread quickly throughout a forest or urban environment.

Why Should I Care About The EAB?

In one sense, Delaware is lucky: we have relatively few ash trees, only around 2% of the population. However, while ash trees make up a small portion of Delaware’s native forests, urban areas can have ash trees as the prominent large street tree. So if you own any ashes – or white fringe trees – you absolutely should care because EABs can be deadly to any American ash species.

How Does The EAB Spread?

Like many infesting insects, emerald ash borer in Wilmington spreads via firewood, timber, or transplanted saplings. One of the sea venues likely brought them to America in the first place. The insects also have wings and are capable of migrating under their own power. While EAB can spread to other trees by flying, its rapid spread along the east coast is mainly due to being transported by those external means mentioned earlier.

How Do I Spot Signs Of EAB Infestation?

An emerald ash borer infestation can take a long time to show visible signs. Here are the main symptoms of an EAB infestation to look for:

How Can My Trees Be Saved If They Have EAB?

Left untreated, EAB will eventually be fatal to ash or white fringe trees. If more than 30-40% of the tree’s canopy is already gone, chances are the tree is too damaged to survive. Otherwise, it can be possible to save the tree. Sustained pesticide usage is the normal course of action, and advance use of treatment may prevent an infestation.

Stein Tree Service has been providing skilled care of trees in Delaware, Pennsylvania, and Maryland for over 35 years. If you believe you have seen emerald ash borer in Wilmington, or signs of damage, contact one of our certified arborists immediately to discuss your options.