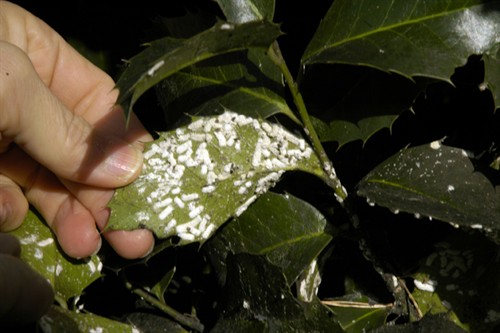 Cottony Camellia Scale insects tap into plants and feed on plant sap, weakening and even killing plants over time. Cottony scale insects produce a cottony egg mass from which the mobile crawler stage hatches. The young crawler stage is also the easiest stage to control.

Scale insects are closely related to aphids but most don’t look like insects at all, appearing legless and attached to the plant’s leaves or stems (see photo right). Scale insects feed by tapping into the plant stem or leaf and withdrawing plant sap. Like aphids, they are often associated with sticky honeydew which supports the growth of black, sooty mold.

Some scale insects produce a cottony sac (see photo right) that contains hundreds or thousands of eggs. Scale insects that make these cottony egg sacs are called cottony scales. Eggs generally hatch in early summer and release the crawler stage, the only highly mobile stage in the insect’s life cycle. The active crawler stage is also the one that must be targeted for effective control.

There are many scale insect pests of ornamental plants and they have very complex life cycles and host plant interactions. One of the best comprehensive sources of information about these pests on ornamental plants is Insects That Feed on Trees and Shrubs by Johnson and Lyon (see Amazon below right).

Plant damage is related to the sap that scale insects take from the plant. Over time as more sap is extracted the plant weakens, leaves may drop and eventually whole branches may die.

Plants that are stressed by drought, root damage or disease are better hosts for many pests including scale insects. These same stressed plants may be killed by high scale insect populations. In addition, sooty mold growing on the leaf surface can interfere with normal processes and can further weaken the plant.
Scale insect control

The most important part of scale insect control is timing. Control measures must be timed to coincide with hatching of the crawler stage which usually occurs in early summer for cottony scales. If properly timed, and good spray coverage is achieved, soft insecticides like insecticidal soaps and oils are just as effective as conventional insecticides (see Using Insecticidal Soap For Garden Pest Control). Over the long run soaps and oils may be more effective since they preserve the natural enemy complex which may account for most of the long term control of these plant pests.

Scout plants starting in late spring. Use a hand lens to look for scale crawlers on the underside of leaves or near cottony egg sacs. Scale crawlers will be about the size of spider mites but amber in color. Once crawlers are found control treatments can begin. It may take several seasons to completely control a severe scale infestation. Scale infestations often take years to develop and it is unlikely that you’ll eliminate them overnight.