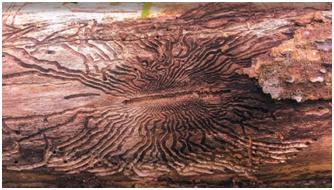 The Beautiful but Destructive Emerald Ash Borer is in West Chester 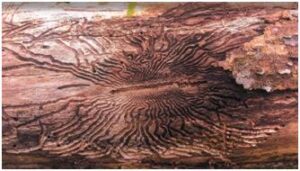 Invasive insect species can be serious threats to ecosystems, especially if the species in question was imported into that ecosystem, which is precisely what is happening now throughout much of North America, with the Emerald Ash Borer (EAB) beetle.

Unfortunately, the Emerald Ash Borer has been in West Chester as well since 2012. The Emerald Ash borer was first found in Pennsylvania in 2007 and the Bureau of Forestry worked with the state Department of Agriculture to minimize the spread. Several methods were used, including traps, insecticide applications and even the release of the parasitic wasp that is the borer’s predator in its home environment.

Emerald Ash Borers (EAB) are small beetles, generally about the length of a dime, which can be easily spotted thanks to the brilliant metallic green shine that gives them their name. With wings spread, they have an equally-striking metallic purple abdomen.

While they would be quite pretty in someone’s insect collection, Emerald Ash Borersare an extremely invasive species which is deadly to ash trees, and also to white fringe trees, which are a close relative to ash. EAB eggs are laid beneath the bark of these ash trees, and when they hatch, the grubs greedily consume the soft plant material underneath.

Since EABs are prodigious breeders, a small infestation in an ash tree can quickly grow out of control.  Some estimate that EABs have already caused more than $10 billion in damage to forests and tree breeders across America, and they are still spreading.

EABs are easily transported within firewood, timber, and nursery saplings. The belief is that the Emerald Ash Borer was imported from Asia sometime in the late 1990s, with the first sightings in 2002. EAB are only a minor inconvenience in Asia, because local defenses, such as the wasps, kept them at bay. American ashes, however, lack these defenses and are entirely susceptible.

How to Spot an Emerald Ash Borer Infestation in West Chester

If you have no ash or white fringe trees on your property, chances are you will never see an EAB or have anything to worry about. However, if you do have ash trees, be alert for the warning signs:

If you see these signs, or spot an actual EAB, immediately contact either a certified Arborist in West Chester, or the state forestry service.  Protecting your own trees is only part of the issue here – authorities need to be alerted so they can continue tracking the spread of EABs.

Saving a tree from EAB is possible if the infestation is caught early enough.  Contact the professionals at Stein Tree Service for more information.