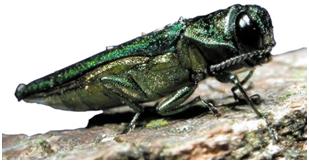 The Emerald Ash Borer in Newark: Life Cycle and History

The jewel-toned emerald ash borer in Newark may look pretty, but the insect has carved a path of destruction across the country. Despite long term efforts by state agencies to prevent further spread, this invasive insect was recently spotted in the local area. Following is a short history and information about the life cycle of this non-native pest.

Where did the Emerald Ash Borer Come From?

Since the insect was first noticed near Detroit in 2002, the emerald ash borer has destroyed millions of ash trees across the country. The spread began slowly, but has escalated in recent years.

The emerald ash borer has three distinct stages of its life cycle. In the first cycle, eggs are laid between layers of the bark or in crevices to allow the newly hatched larvae better access to the sapwood underneath. Once hatched, the emerald ash borer feed off the inner wood of the ash tree, leaving galleries that disrupt the tree’s ability to properly get water and nutrients. The galleries are the most destructive aspect of the emerald ash borer’s impact, and are what eventually lead to the tree’s death.

Once colder temperatures hit, the larvae dig deeper into the wood to wait out the winter. The adults, which feed off the leaves at the top of the tree, emerge from D-shaped holes in the spring, and the cycle starts again.

Property owners can take steps to prevent or reduce the damage caused by the emerald ash borer in Newark. Check your ash trees for signs of a potential infestation and contact a certified Arborist for prompt attention. Signs of an infestation include:

Chemical applications are sometimes needed to treat EAB and they can only be applied by licensed vendors. Stein Tree Service is licensed to apply the treatments for EAB and other tree care. For more information about treating your ash trees for the emerald ash borer in Newark, please contact the team at Stein Tree Service today!